We had 14 Juveniles represent the club at u14, u16 and u18 level before the action got underway for the Raheny Junior Men and Senior Women and Men.

The Raheny Girls u14 team were the first in action. The team of Claire O’Leary, Willow Agnew, Clara Woods, Maggie Foley, Sophie Kelly, and Rebecca O’Rourke finished 10th in the All-Ireland Club Competition, up from 17th last year in their equivalent age.

Fantastic performance from the girls and to top it off Claire was second scorer on the Dublin u14 County team which finished 3rd in the All-Ireland County Competition. First All-Ireland medal for Claire – such a fantastic achievement!

Next up were the girls u16 club team of Elena Forkan, Chloe Griffin, Rachel Costello, Cara Griffin, Freyja O’Carroll, and Esther Ntoko who finished 13th club in the All-Ireland Club Competition yesterday, also improving on their finish last year.

Elena finished the day as an All-Ireland Champion scoring on the Dublin County team which took home gold on the day! Elena also scored on the provincial team which came away with bronze.

Next up for the club was George Sevastopulo who finished 52nd in the boys under 16 competition, running a year out of age. Fantastic run by George.

Finally in the Girls u18 race, Ella Beck ran a fantastic race to finish 51st.

Great performances all around by the juveniles after such a fantastic achievement in the first place to make it to All Irelands! 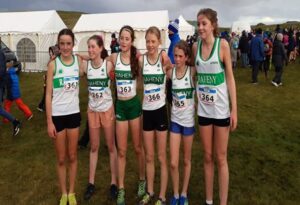 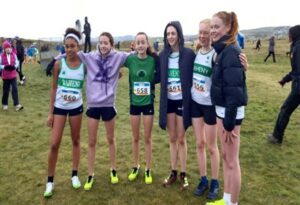